PORTLAND, Ore. — Oregon ranked second in the country in 2017 as a destination for people who moved into a new state, according to tracking statistics released by moving company United Van Lines.

Of all state-to-state moves in Oregon last year, 65 percent were inbound. In a press release, United Van Lines said the most-common reasons for moving to Oregon were company transfers (49 percent) and proximity to family (24 percent).

The 41st annual National Movers Study, which track customers’ state-to-state migration patterns, found that Americans continue to head west, while parts of the Northeast and Midwest are losing people.

Three of the top four destination states are in the West, with Idaho and Nevada joining Oregon. The outlier was Vermont, a Northeast state that ranked No. 1 with the highest percentage of inbound migration in 2017.

At the other end of the spectrum are Illinois and New Jersey, which shared the highest percent of outbound moves at 63 percent, followed by New York (61 percent) and Connecticut (57 percent).

“This year’s data reflects longer-term trends of movement to the western and southern states, especially to those where housing costs are relatively lower, climates are more temperate and job growth has been at or above the national average, among other factors,” said Michael Stoll, economist and professor in the Department of Public Policy at the University of California, Los Angeles. “We’re also seeing continued migration to the Pacific Northwest and Mountain West as young professionals and retirees leave California.”

The Associated Press contributed to this article. 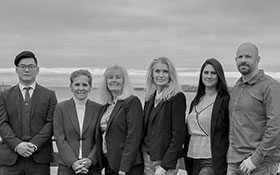